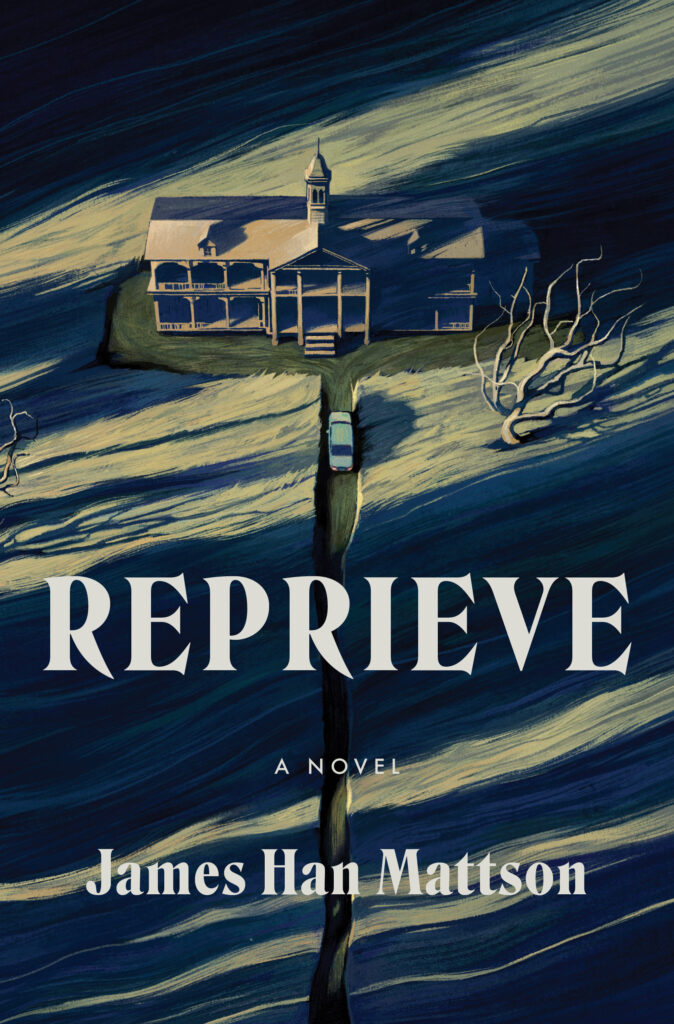 A chilling and blisteringly relevant literary novel of social horror centered around a brutal killing that takes place in a full-contact haunted escape room—a provocative exploration of capitalism, hate politics, racial fetishism, and our obsession with fear as entertainment.

On April 27, 1997, four contestants make it to the final cell of the Quigley House, a full-contact haunted escape room in Lincoln, Nebraska, made famous for its monstrosities, booby-traps, and ghoulishly costumed actors. If the group can endure these horrors without shouting the safe word, “reprieve,” they’ll win a substantial cash prize—a startling feat accomplished only by one other group in the house’s long history. But before they can complete the challenge, a man breaks into the cell and kills one of the contestants.

Those who were present on that fateful night lend their points of view: Kendra Brown, a teenager who’s been uprooted from her childhood home after the sudden loss of her father; Leonard Grandton, a desperate and impressionable hotel manager caught in a series of toxic entanglements; and Jaidee Charoensuk, a gay international student who came to the Unites States in a besotted search for his former English teacher. As each character’s journey unfurls and overlaps, deceits and misunderstandings fueled by obsession and prejudice are revealed—forcing all to reckon with the ways in which their beliefs and actions contributed to a horrifying catastrophe.

A startlingly soulful exploration of complicity and masquerade, Reprieve combines the psychological tension of classic horror with searing social criticism, and seamlessly threads together trial transcripts, evidence descriptions, and deeply layered individual narratives to present a chilling portrait of this tangled American life.

“Reprieve is an eventual American classic that is unrelenting in its beauty and incisive cultural critique. But it is James Han Mattson’s treatment of his fully flawed characters that clutches my heart and head. Every room in this book has a secret room. Every character has a shadow trying to swallow them whole. I’m not sure there is ‘fearless’ American writing, but a few times a generation, there is innovative writing that appears to confront, shred, and accept the fears of its author and its readers with a wicked joy. Reprieve is that book. It really is.” — Kiese Laymon, bestselling author of Heavy: An American Memoir

“Reprieve takes horror as its subject, while also using the genre as its means, delivering twists and fright and the kind of storytelling that keeps you turning pages. But the brilliance of James Han Mattson’s novel is in deploying the haunted house as a metaphor for our nation, where the true scare is a cultural reckoning with whiteness itself.” —Rumaan Alam, New York Times bestselling author of Leave the World Behind

“I’m in awe of the remarkable power of James Han Mattson’s REPRIEVE in doing the impossible—it devastated me, yet left me hopeful. It’s the perfect novel for our time, combining a nail-biting murder mystery with brilliant social commentary on fetishization, misogyny, racism, and heteronormativity. I’m blown away.” —Angie Kim, bestselling author of Miracle Creek

“Surprising and spellbinding, Mattson’s latest offering is a page-turner that keeps you guessing right until the explosive end.  Smart and entertaining, Reprieve is the rare novel that’s both thrilling and thought-provoking. A must-read!”   — T. Geronimo Johnson, bestselling author of Welcome to Braggsville

“A timely, devastating story about intersecting lives drawn to a dark and frightening place. Rich with insights about our contemporary moment and characters blinded by their desire for belonging and connection, James Han Mattson’s Reprieve is the rare novel that will make your heart pound with terror while it aches with grief.” —Jung Yun, author of Shelter

“Reprieve is a tense, riveting novel about an American house of horrors where fear and desperate desire collide, exploding into violence. James Han Mattson writes with grace and conviction, delivering intimate portraits of flawed, fascinating people, down to the carnival distortions that occupy their minds.” —Steph Cha, award-winning author of Your House Will Pay

“Reprieve is a self-aware and furious deconstruction of the horror novel, contrasting those who seek out fear with those who face the ever-present dangers of prejudice.” —Crimereads